a feral child of the wolves, Amelie has only recently become accustomed to life with people, and then only barely. she travels in wolf form more often than not, allowing her sense of smell to show her the way, which has been doing wonders for the party as they wander about, trying to find their way through the Plane of Shadows.

She has recently taken on as an animal companion the juvenile hippogriff Humfry after his previous friend R. W. Nessingwary, the third was killed by a hydra.

Quite the master at potion brewing, she knows her way around the jungle better than a city and it is rumored that there is more than one nest of birds in her dreaded hair. 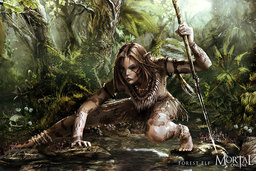