From dragon legend, Bahamut is known to be a the good brother of the evil dragon goddess Tiamut. It is believed that he created all of the good dragons and subsequently the pure elven races that followed.

Until recently it was believed that Bahamut, like the dragons he was said to rule over, were just legend; but the arrival of a true believer, a half elf by the name of Vyth Levethix, Urdu Gaa Valam Dam Mela Viym Dan Verthicha Okarathel has changed many things. Not only did Vyth Levethix claim to be the lone surviving member of a silver dragon half elven race known as the Orn Vaecaesin but he was a believer in a god that nobody even though existed anymore.

And as some say, it takes but one believer.

Since Vyth Levethix’s timely arrival on Dragon Isle, signs of Bahamut’s returning grace (reawakening) to the world have become imminent. When the young half elven monk Thea suffered an untimely demise, she followed the wandering and confused spirit of the silver dragon Clymestria all the way to Celestia and met the ancient draconic god. There he agreed to give her a second chance at life if she would do one task for him: be his working hand in the mortal world that he was as of yet unable to touch. When she agreed, he bound the lost soul of the silver dragon into Thea’s body and instructed her to find a way to reunite the essence of the dragon with her lich form so that she could finally, after centuries, find peace.

Still, the great draconic god’s feeble inability to interact directly with the world of the living is worrying to those that would seek his grace. Many believe that it is through the meddling of another god, perhaps an unknown brother or sister to Bahamut and Tiamut, is interfering with the two gods in such a way to to keep them apart from the real world. Something must be done to rectify this, before it is too late. 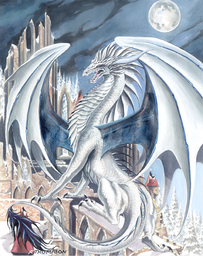