The silver dragon shunned by society for marrying a gold dragon named Xycanthum. She made a pact with Tiamut to protect her unborn clutch, subsequently rendering the magical protections of The City eternally unstable. The act of performing such a horrific ritual turned her into a lich and her soul has been wandering the outer planes for centuries, unable to find its way home or to Bahamut, her rightful God. Her body is trapped in the magical cloud cover above The City as a dragon lich, attacking anybody who dares to trespass upon her eternally unhatching eggs.

Bahamut has managed to harness her soul and place it inside the mortal body of a half elven monk named Thea. The likes of which have never been witnessed before, and though it has granted Thea some of the abilities of a silver dragon, she is finding it harder and harder to remember to be Thea and not a dragon. 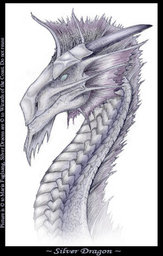