The half-orc named Kaine is the son of a human wench named Melissa and an orc barbarian adventurer named Gruk. Kaine is a 35-year old balding half-orc with a repeatedly broken nose numerous scars criss-crossing his body. His lined face is often set in a perpetual scowl, but a twinkle in his eyes suggests a more lighthearted nature. He wears around his neck a tiger totem of his orc ancestors.

Kaine’s mother worked at a brothel in the City named the Lucky Traveler, an establishment that catered to adventurers and their appetites. Melissa also had a daughter named Content Not Found: Celestra, Kaine’s older half-sister. Celestra’s father was an unknown human man, and Celestra was a beautiful woman like her mother. With an age difference of only 2 years, Celestra was very protective of her ugly younger brother, and Kaine in turn was very protective of his smaller older sister. Kaine’s father was part of an adventuring party called the Rogues of Fortune. This group included Content Not Found: Gruk, a human scoundrel named Content Not Found: Dash, and a human sorcerer named Verek. The Rogues of Fortune would take nearly any job offered to them if the danger was high and the pay higher, but specialized in raiding tombs and recovering priceless artifacts. The Rogues were frequent visitors to the Lucky Traveler, and Gruk took an interest in Melissa, and Kaine was the result. Gruk and Melissa never married, and although Gruk was seldom present, he was a good provider for his woman and her two children. Kaine grew up in the Lucky Traveler, and soon developed a fondness for spirits, women, and adventure. He would sometimes listen for hours as a patron would recount his exploits. Other times he would go out on exploits of his own. Though sometimes shunned by his human neighbors, Kaine could often pressure other children into following him on adventures by impressing them with displays of strength and courage, or calling them cowards if they refused. Other times he would explore alone. Although raised most of the time by his mother and sister, Kaine’s greatest role models were his father and his father’s adventuring companion, “Uncle Dash.” Whenever the Rogues of Fortune were in town, Kaine would always be at their side. Gruk tried to raise his son, but was always somewhat distant from his son, focusing more of his attention on Melissa. Dash on the other hand, was always there with a twinkle in his eye and a parlor trick up his sleeve to entertain the young half-orc. Kaine spent a lot of time with Dash while Gruk was behind closed doors with Melissa. Dash taught Kaine about swordplay and acrobatics, lock-picking and sleigh of hand, dungeon delving trap disarming. Dash also told Kaine stories about adventure and taught him about teamwork, courage, and respect. In many ways Dash was more of a father figure than Gruk ever was. When Kaine was 14, Uncle Dash came back to the Lucky Traveler but without Gruk and the rest of the Rouges of Fortune, only a donkey pulling a covered cart. Kaine ran out to meet him, asking where his father was. While Dash was still struggling to speak, Kaine frantically tore back the sheet covering the cart, revealing the corpse of Gruk. Kaine stared at the lifeless body of his father while Dash stammered something about Gruk falling victim to a trap. When Dash tried to put a hand on the boy’s shoulder, Kaine lashed out at him in rage, breaking Dash’s nose and knocking him unconscious to the ground. Horrified at what he had just done and about his situation in general, Kaine ran. He ran for days in a panic, hardly stopping. Eventually he reached a small town. Hot knowing what to do with his father dead and mentor alienated, he decided to put his past behind him and become a man. He soon found work as an adventurer, and bounced from job to job for years. Eventually he guilt for abandoning his sister caught up to him, so he returned to the Lucky Traveller. When he arrived, he found that much had changed in his absence. He came back to find that his mother had died, but the Celestra was alive and well. Celestra begged Kaine to take him with her adventuring, and he finally agreed. Their first adventure ended with the two of them being captured by dragon cultists and rescued by Vyth & his party.

Kaine was very close to his half-elven half-sister Content Not Found: Celestra until she got eaten by a tree and disappeared. He has at least 7 children with 5 different human women, some in the City and some not, and he visits them regularly to spend time with them and make sure they are provided for financially.

Of late, Kayne has taken up residence with a human named Aud and her daughter. This is not the first dalliance that he has had over his adventuring years, and there is the constant wonder if he will produce a child by Aud as he has his other girlfriends.

In fact, it seems that Kayne has an unnatural liking for children, or at least an unnatural liking for children for a half-orc. He is known to show kindness to any who have small children that they need to take care of, and has spoke of starting his very own Orphanarium in The City. In fact, he has picked up his first orphan in has travels, a half-dragon baby named Content Not Found: Kaylee who was going to be left for dead in the streets of Wyrmshadows. 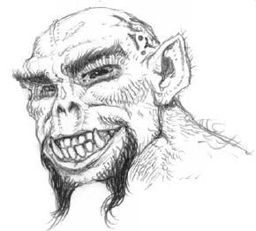