Saved by the grace of Bahamut from the throes of death, Thea arose to greet her companions certainly not the person that she once was. At first the changes seemed trivial, tentacle like obtrusions where she once had hair, a general silvering of the skin; but through time Thea has come to realize that she knows things that she should not. She almost certainly has access to the memories and collective unconscious of the silver dragon whose soul resides her body.

Indeed, it soon became clear that many of the traits associated with the Silvers are also present in Thea: cold immunity and an obsession with beautiful treasures being the obvious two. As she has grown more comfortable in her own body, she has developed claws and an obsession with using her Polymorph Self ability to become a half dragon. Something about that form seems so natural to Thea these days, perhaps she is indeed half Thea and half a dragon. 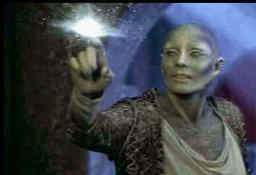