Last of the Orn Vaecaesin

Until recently the one and only true believer in the old draconic God Bahamut, Vyth has single handedly rekindled the belief in The City which is his home base of power. Though he left behind his new found cult to investigate the strange disappearance of some life stones, his followers have amassed in his absence. It is almost assured that he will return home to a heroes welcome, and word is already spreading that upon his death, he will attain saint hood in the name of the great Bahamut.

Vyth is an elf of old belief, and even older rituals. It is said that he carries a sword forged from a dragons willing soul for the sole purpose of slaying evil dragons, and that his quest will go on eternal, like that of his God. 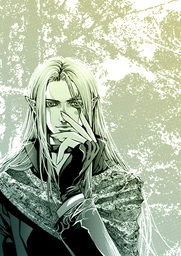